The Lunar Festival that many of you know and love is back in Gods of Boom. This time, the celebrations will last for 12 days and will offer a ton of amazing content!

Play event game modes, receive event tokens and use them to get items from fairs as well as rank up in the event ratings. 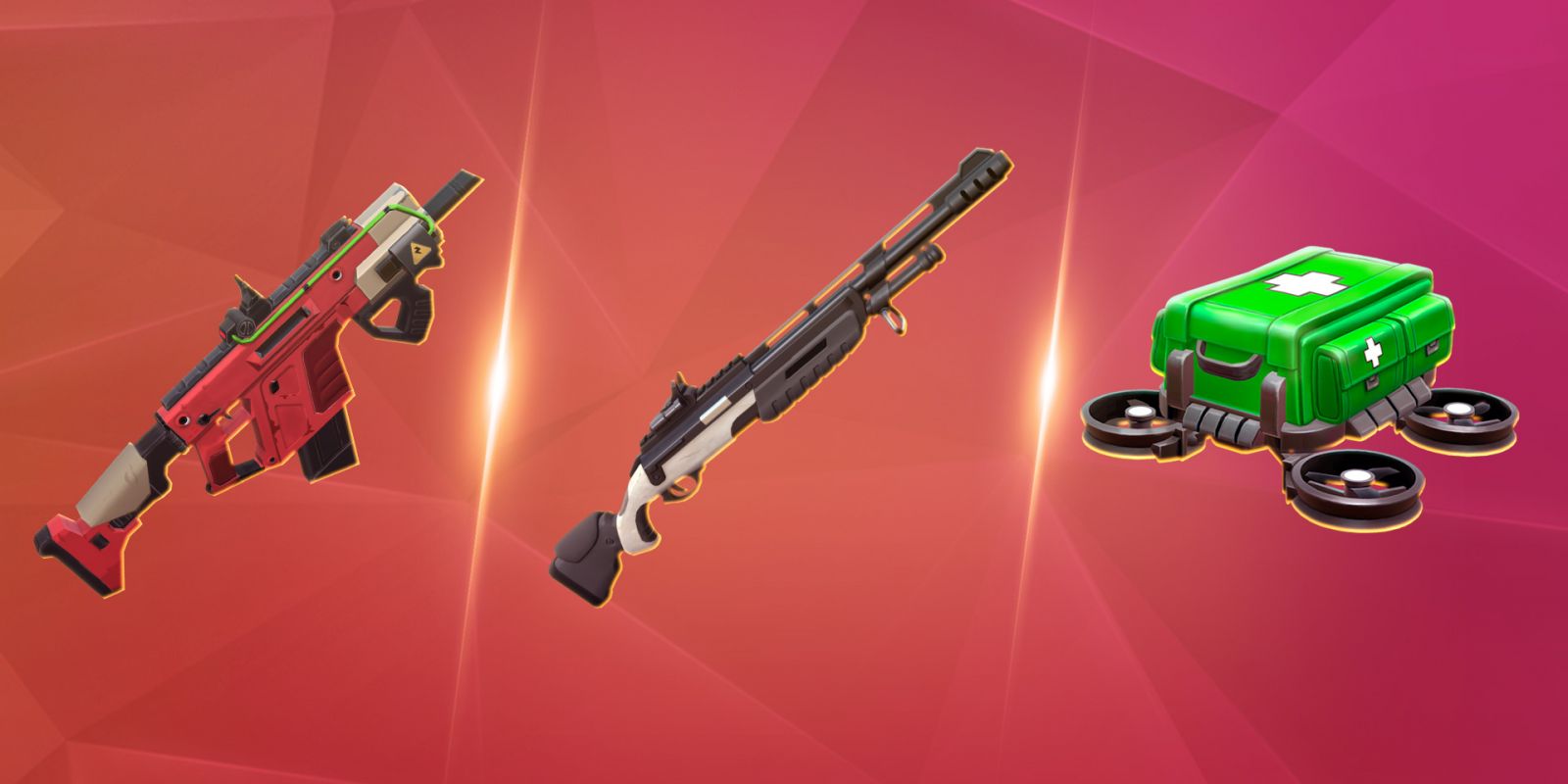 There will be 2 fairs during the event. The first one with the new Wasp assault rifle will be open at the start, and the second one with Orion shotgun will unlock on day 6. The fairs will also feature new stuff like the upgradable costume and the Med Module that heals your teammates. More on these below! 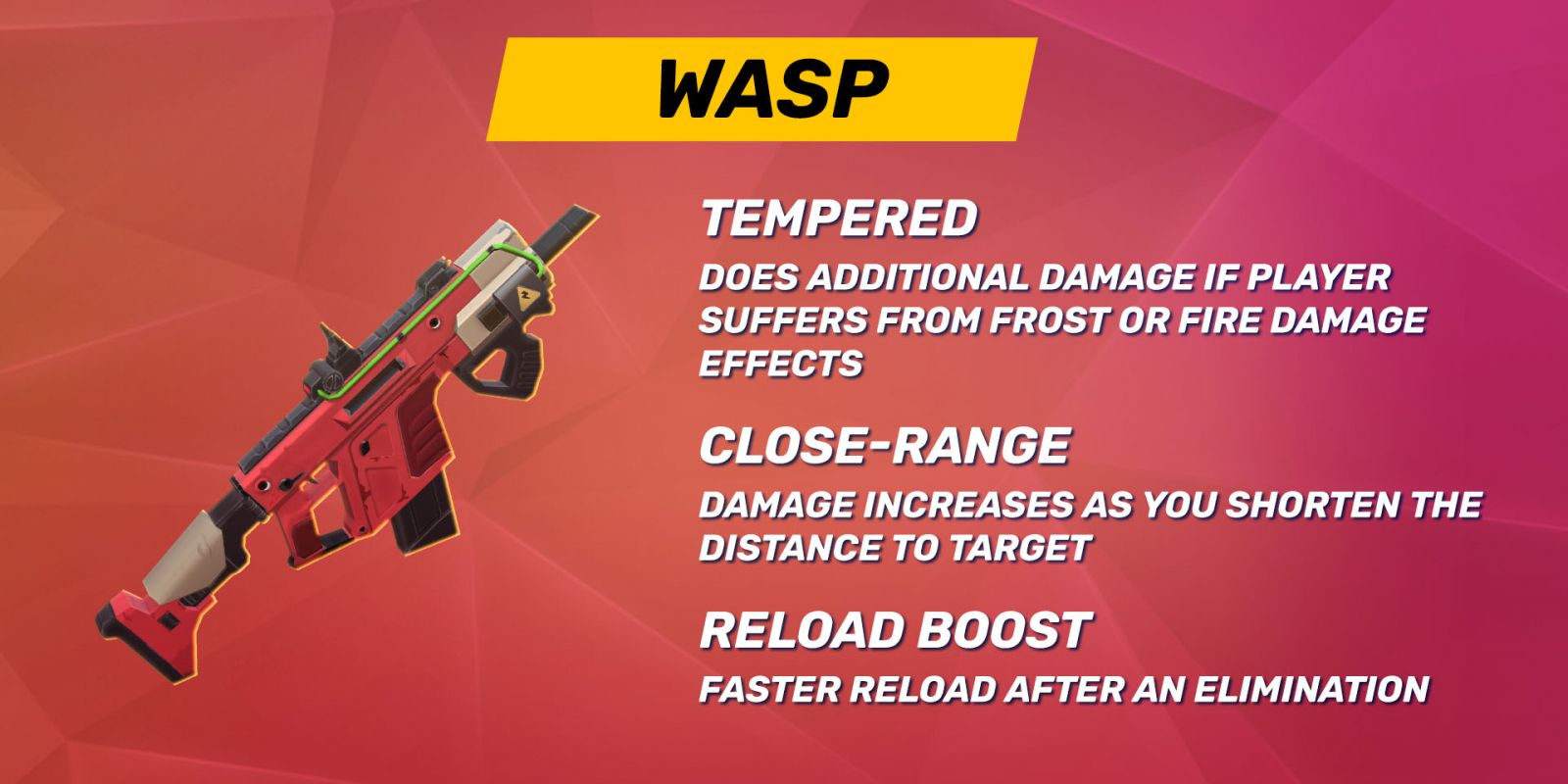 This newest addition to the assault rifle family is very special. It’s available to all players level 16+ and has a few interesting perks:

So, if you’re tired of feeling outplayed by incendiary and freezing guns, get Wasp in your arsenal, and turn disadvantages into additional damage for your enemies. Also, this assault rifle is especially dangerous in close quarters. Almost like a shotgun, really. If you're not afraid of getting face-to-face with the enemy, you'll be rewarded: the extremely high fire rate will blow them off their feet. Be careful though, the recoil is pretty heavy on Wasp, so keeping a steady fire from mid-range may be challenging. 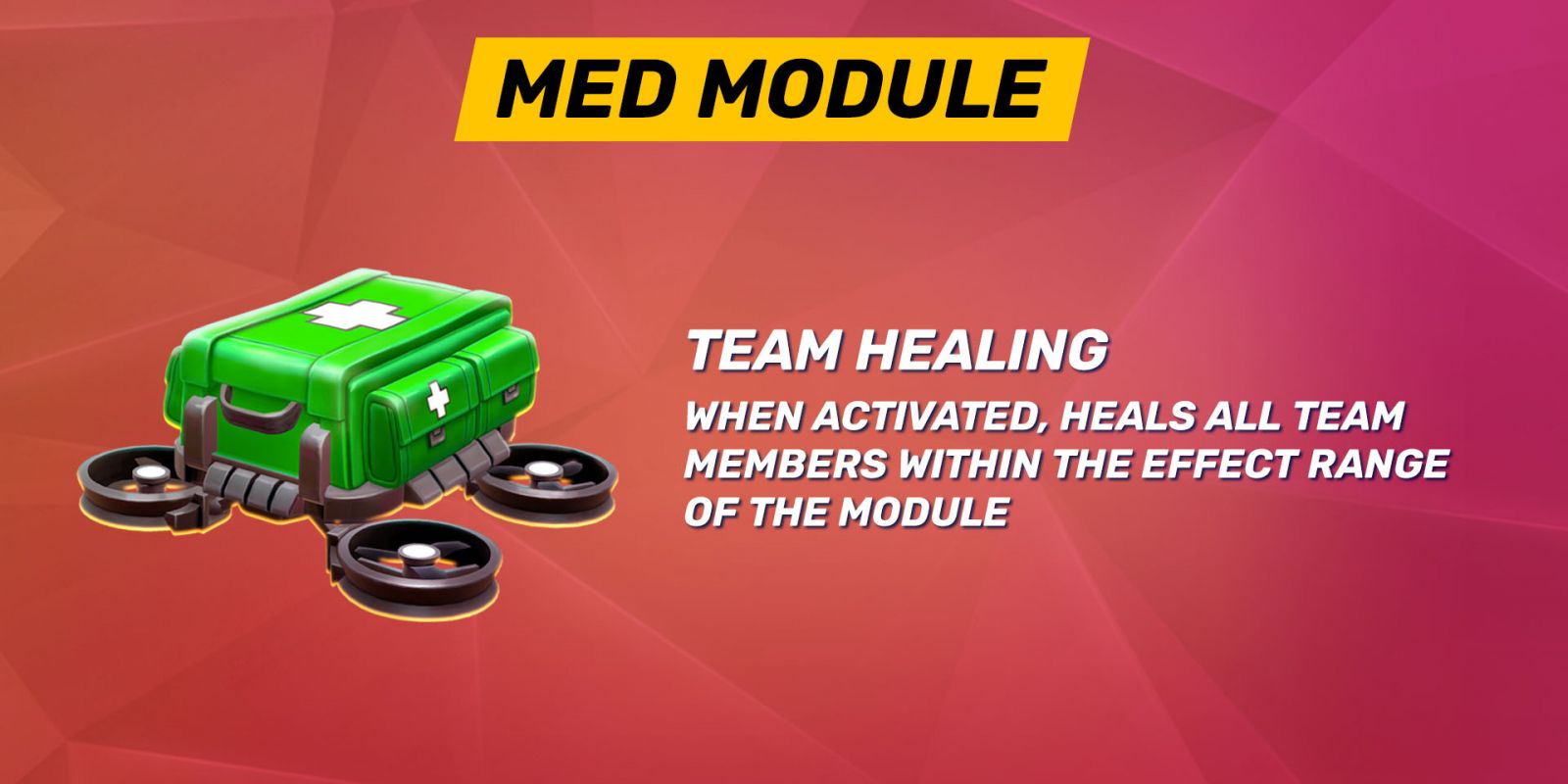 We all use consumables as our personal items: we heal ourselves, restore our armor, and so on. The Med Module is the first healing consumable that can help both you and all your teammates! Just plop down the Med Module and gather around it – it will restore the HP of all allied players in its range. It’s a great way to heal, as well as a good way to regroup. Just make sure a G-Launcher is not aimed at you while your whole team is clustered around this brand-new source of HP. 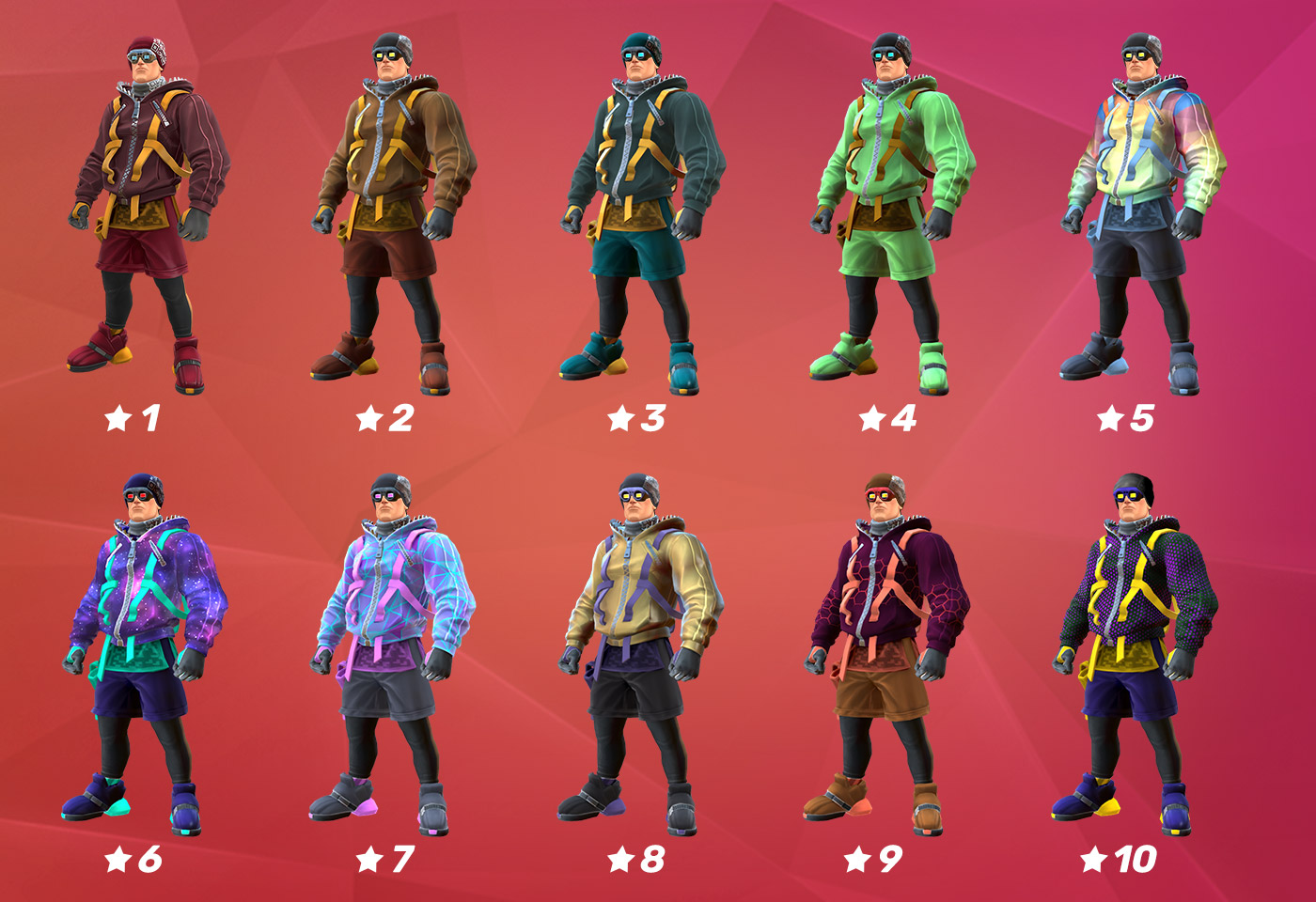 There’s a new costume in the event – QRRIOR – and it’s new in more ways than one! This cosmetic item is the first one ever you can upgrade using scraps. Just spin the wheel and find out if you’re lucky enough to take the item to the next level: the item can gain a level or two, stay the same level, or sometimes even gain THREE LEVELS.

Every unsuccessful upgrade increases your chance for the next spin, so having a few failed attempts in a row will soon give you a 100% chance at a successful upgrade. Upgraded costume features additional effects: the higher level your item is, the more flashy and unique it’ll be.

You can get this costume by signing both event contracts and completing most of the challenges in them.

This time, we’ve prepared 2 maps and 2 modes for you to enjoy:

INTERCEPTION on ASIA: FUSION. Get the object at the center of the map and hold on to it for as long as you can. The longer you do, the more points you get. Enemies can take the object away from you: if they eliminate its carrier, the object will fall to the ground and become available for pickup by other players. The team with the most points at the end of the match wins. 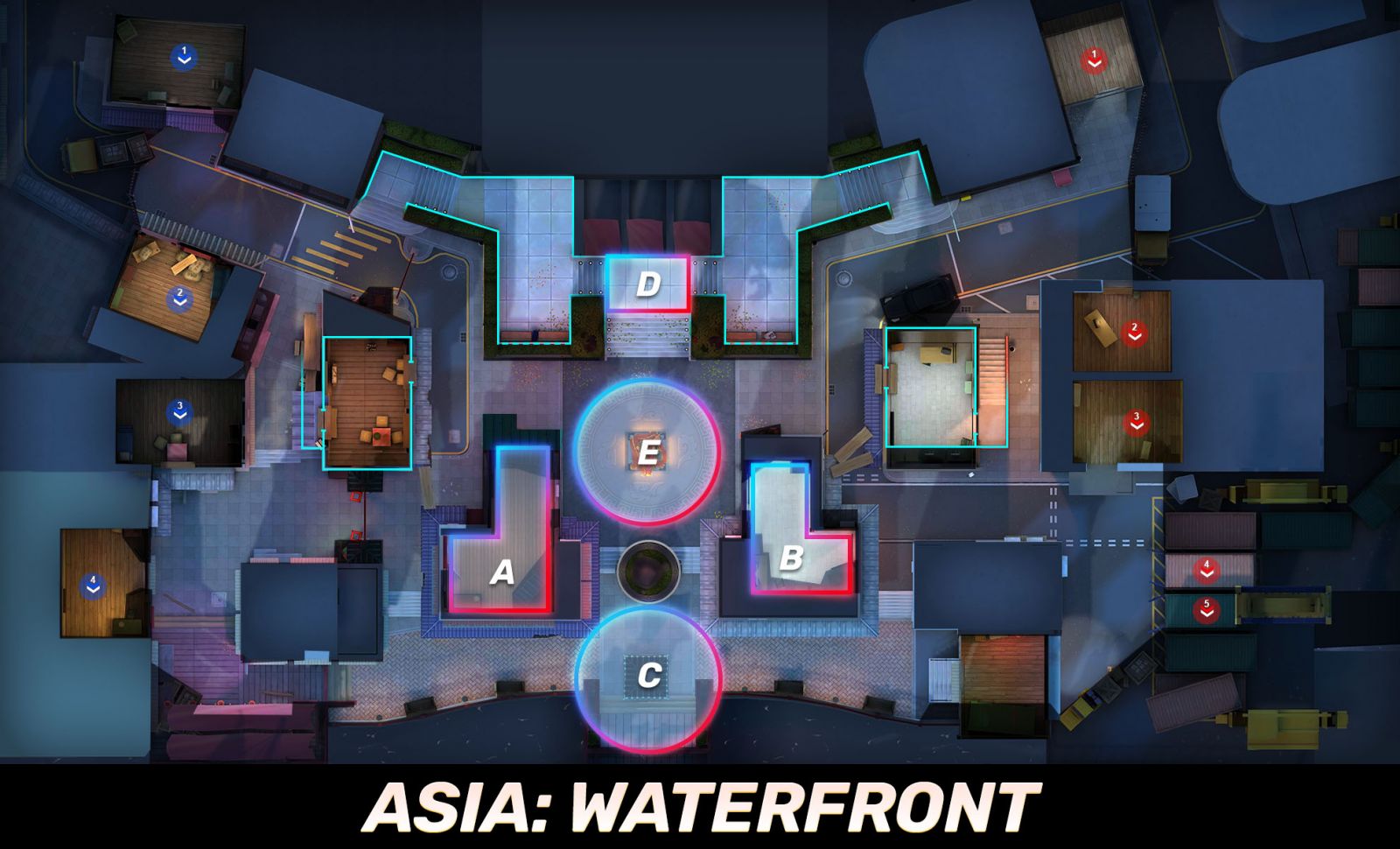 ZONE CONTROL on ASIA: WATERFRONT. Two teams compete in capturing zones that appear in different parts of the map. The first team to capture a zone starts scoring points, yet their opponents can take control of the zone away and start gaining points themselves. After some time, the zone disappears in one place and appears in another – the race for points continues. 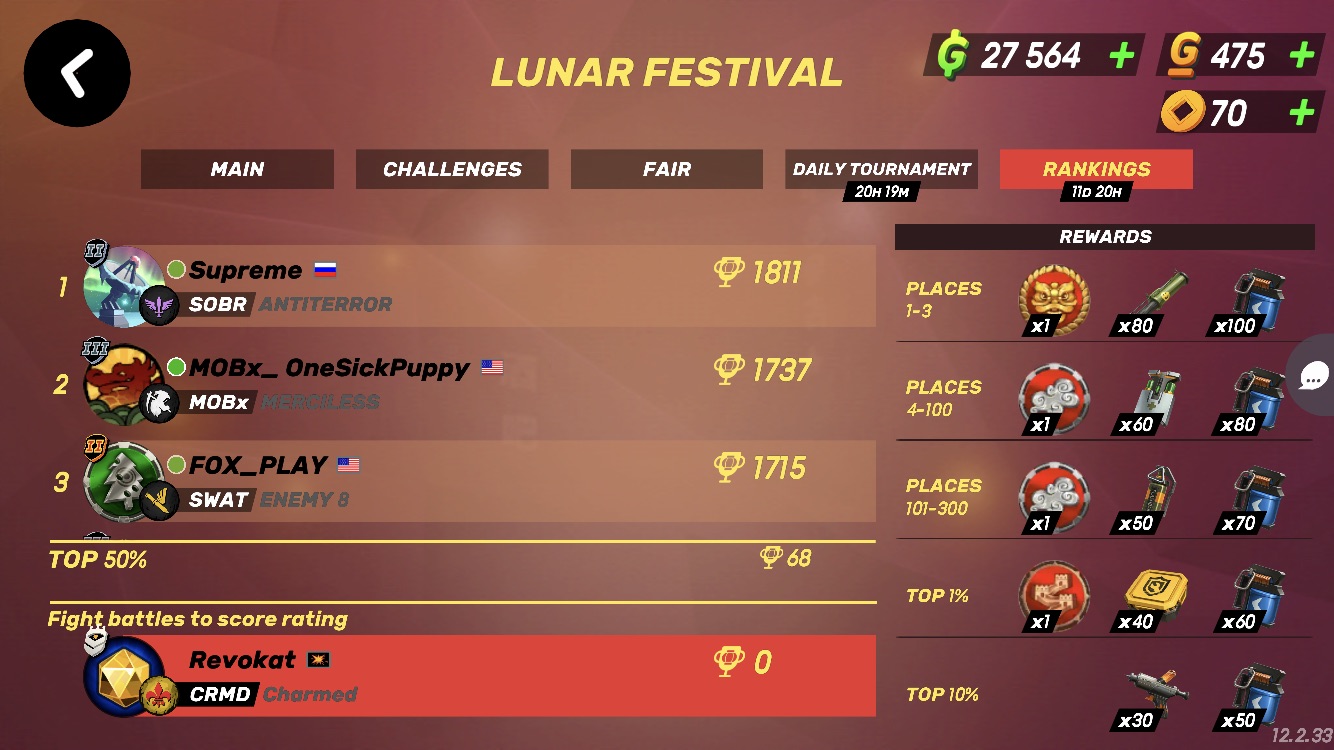 The fairs aren’t the only source of loot during the Lunar Festival. Daily and event ratings are a great way to get more rewards for your efforts. Just play in matches and gain event tokens – these are both the currency of the event and the rating points. Don’t be afraid of spending your tokens at the fairs though – your rating won’t go down. Daily rating rewards include consumables and crates full of cosmetics. Overall event ratings offer unique insignias and sets of consumables as rewards. Totally worth the grind! 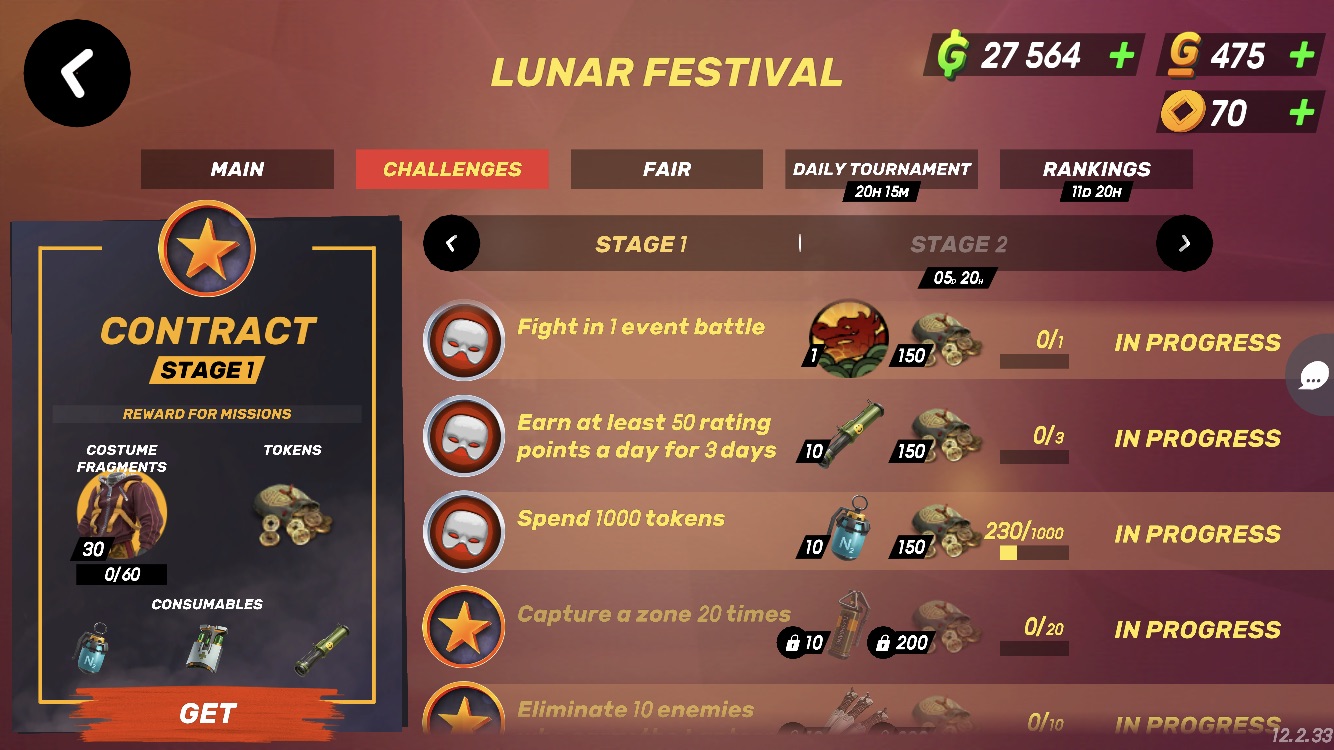 Once again, we’ve added some neat challenges to the game to test your skills. Complete them to get consumables and event tokens. Want more? Well, then sign a contract, and complete additional challenges to get your mega reward — the upgradable QRRIOR costume!

That’s all you need to know about the Lunar Festival 2020. Jump into the action, take part in event battles, gain tokens, participate in fairs, win rewards in ratings, and complete challenges to get the full Lunar experience. Good luck!